Where does your money come from?

“It is well enough that the people of the nation do not understand our banking and monetary system, for if they did, I believe there would be a revolution before tomorrow morning” – Henry Ford

I am no financial expert, but I have been following the financial world for sometime now. So I want to share something with you all.I am going to clear the popular and fake beliefs people have in governments and central banks, and clarify what happens exactly with their money and how it comes from banks. I cannot guarantee that whatever I say *Is* correct, please do your research as well.

So let me come to a question, “Who controls our money?”

We all know that the money we control is not in our hands nor is it in the hands of people like our employers from who we receive our moolah. It does not come from the company or even from the government.

Let’s go back in history to find the origins of the money we all can’t live without today.

Central banks have emerged over the past four centuries when mankind moved from a system of gold or silver backed currencies to private issuers and later to fiat money. The first central bank in the world was the Swedish Riksbank, founded somewhere in the 17th century.

William Patterson, then a Scottish businessman came up with the idea to mint money out of thin air to supply to the government when the government of England wanted to raise funds for a war.

This marked the beginning of the very first modern central banking in the world.

Fast forward to the 20th century, a group of six bankers wanted to set up a central bank in the United states of America. 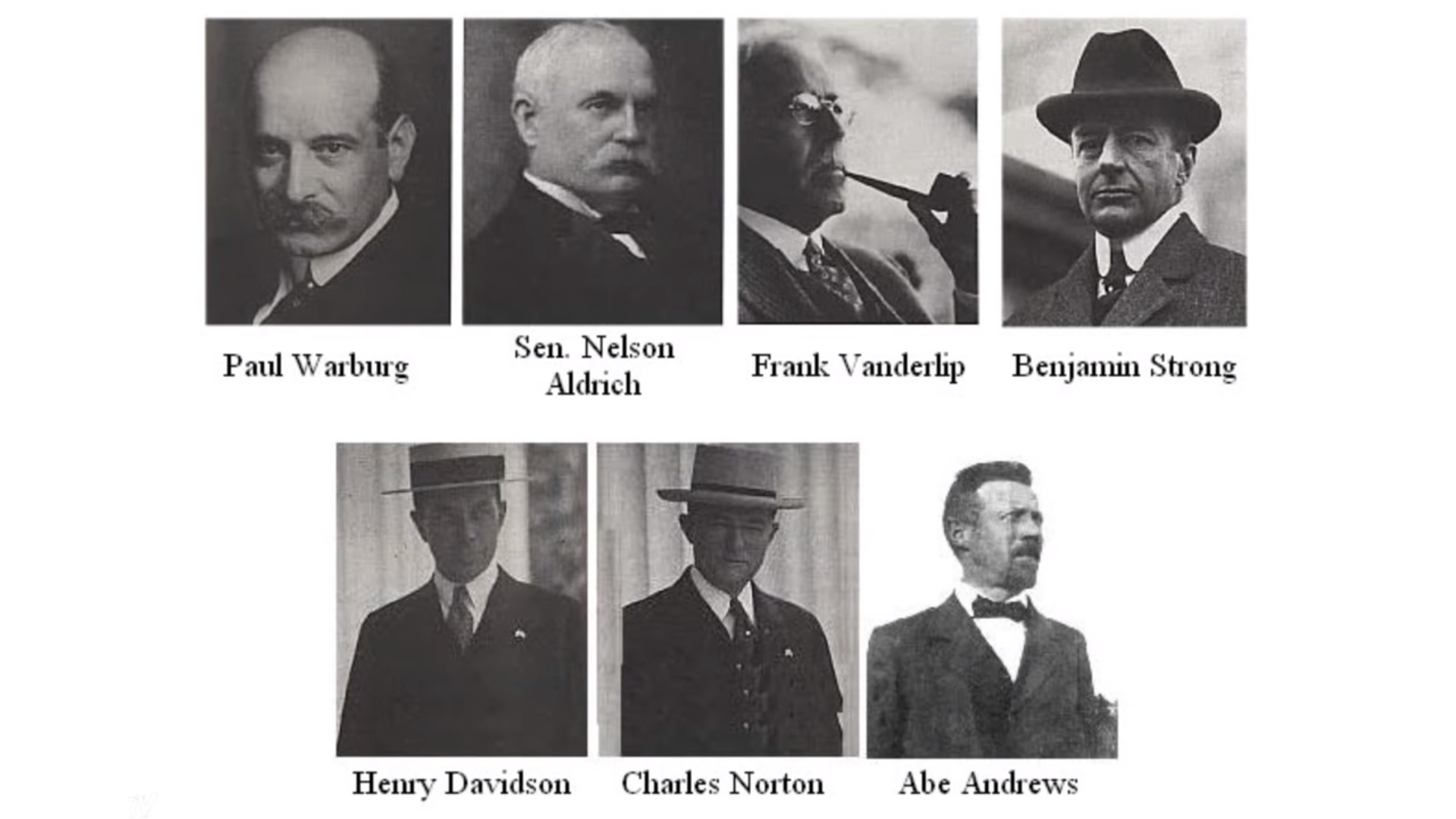 There was a nine day meeting, and from there, they created the Federal Reserve system.

The 6 people together constituted almost 1/4th of the entire world’s wealth at that time!

Have a look at one of their quotes: So the main aim of creating the system was to set up a system and create money out of nothing and loan it to the American government with interest.

Back then people didn’t want a central bank because they knew about the central banks and understood their system very well.

During all booms and bursts, the top tier of people, the rich mysteriously became richer, and the poor, became poorer.

Soon the currency bill got passed, bankers protested. Bankers were removed, and the bill gave control of the entire currency to a group of people and their institution called the Fed or Federal Reserve.

Today, the Federal Reserve is the most powerful entity in the United States.

It seems, the federal reserve cannot even be touched by investigating agencies!

Federal reserve claims they hold full responsibility to conduct internal audits and no one should interfere with them.

Since the end of the Second world war, almost all the currencies were backed up by the US Dollars, and all the central banks of different countries hold US Dollars in their central reserves. This means almost any country’s monetary policy is indirectly linked to the federal reserve bank’s policy!

Post world war II, a new monetary system, called the “Bretton Woods” system came into existence, almost all the the currencies were backed up by gold,  and almost all currencies were then linked to USD, as depicted in the picture below. 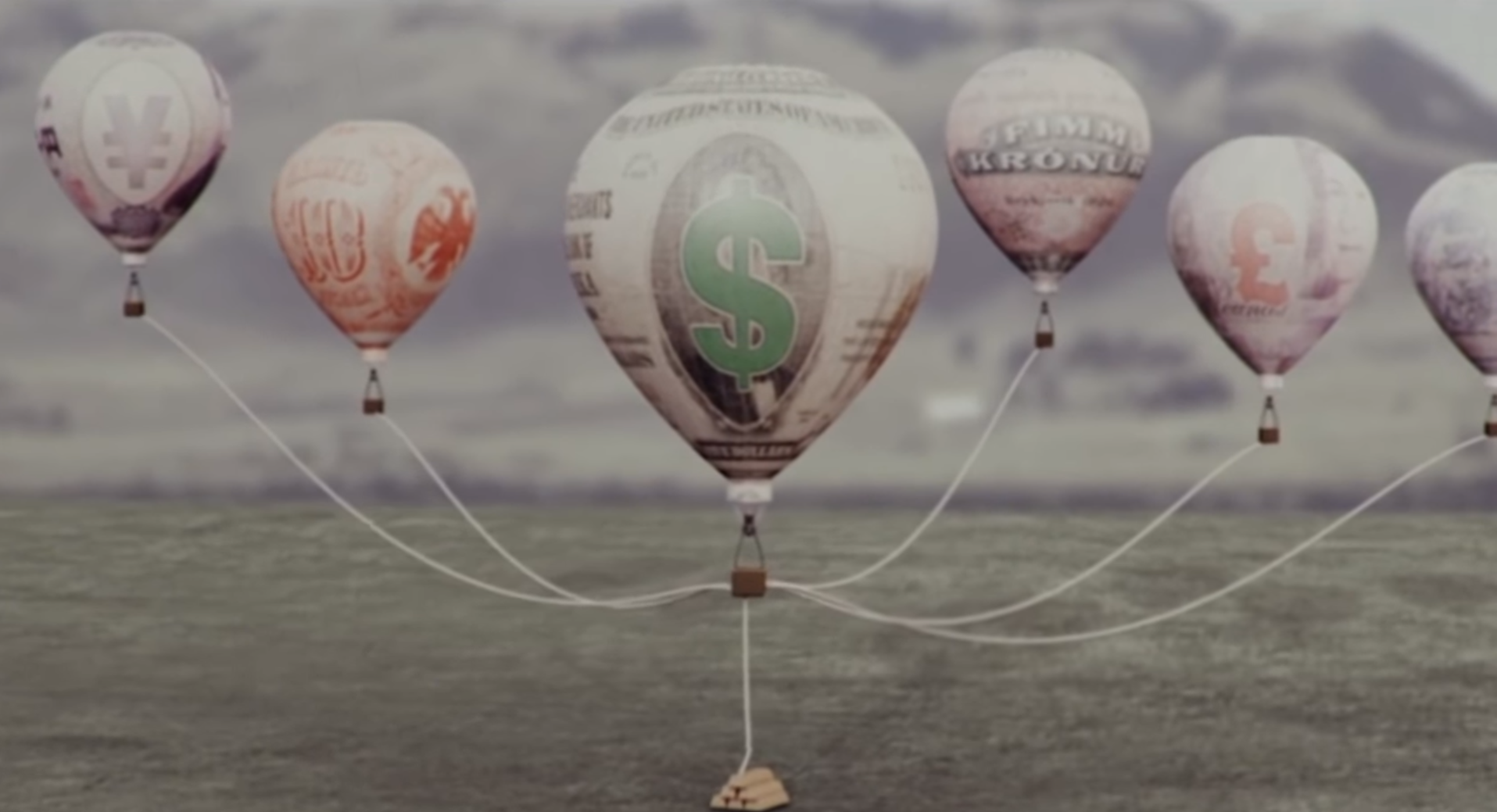 As a result, there was a strong network and all the currencies were stable with each other.

Unfortunately, in the year 1971, due to a falling US Dollar, international capital flow into gold and the Vietnam war, the then US President, Nixon, took the gold standard off the US Dollar.

Now look at the image below: It’s absolutely correct. Welcome to the world of “Fiat Currency”

Fiat in Latin means ‘let it be done’. Or, in other words, the government says it’s money, hence it’s money.

Little do we realise that when the federal reserve mints money out of nothing, it dilutes money in all other nations indirectly.

So currencies like Chinese Yen, Rubble come close to being worthless each time new money is minted by the Federal bank!

In the past few years, the Federal Reserve has printed trillions of dollars, and the countries like Russia and China noticed this. As a result, these countries have been silently selling USD reserves and buying gold instead.

The whole economic system is in other words backed up by faith, since we never know, or even try to know where the money comes from.

Have a look at one quotation from the Federal Bank! 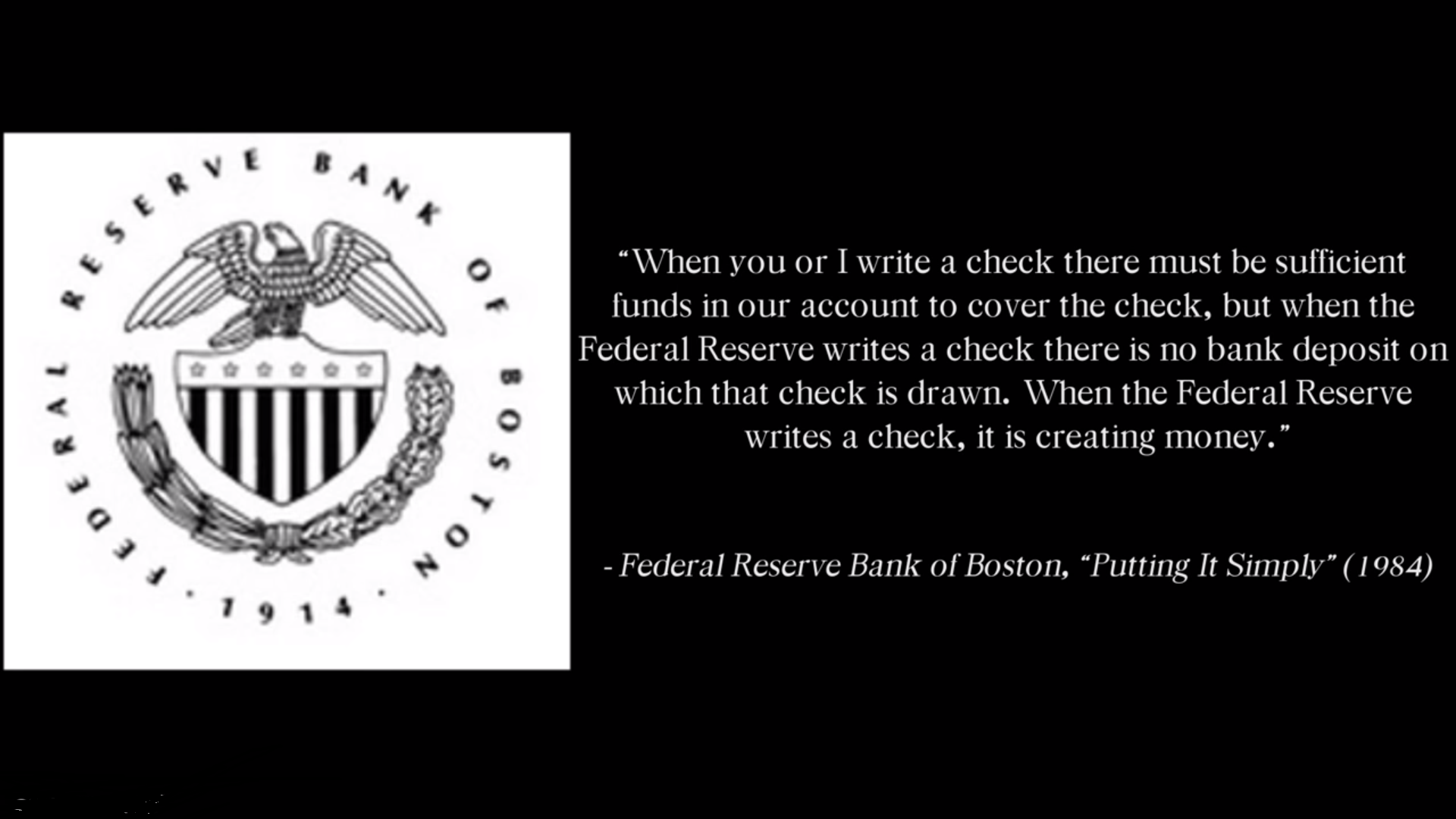 So, they are creating money out of nowhere, and are drawing a cheque from a bank account that holds no money every time someone takes a loan. The money the Federal Bank creates can be used as a legal tender to buy anything from the market that we wish.

If we create money out of thin air like that, we will go to jail for that, but they can do it because they invented the system!

This is the same system used throughout the world today!

Another part of this money creation happens at the commercial bank’s side, where, let’s say we take a loan to buy house or a car. The bank creates money out of nowhere and give it to us. And the irony of the fact is that we still have to pay interest on that amount!  Don’t just believe me, do some research I would say, because these facts are never revealed by banks.

Have a look at some of the quotes: 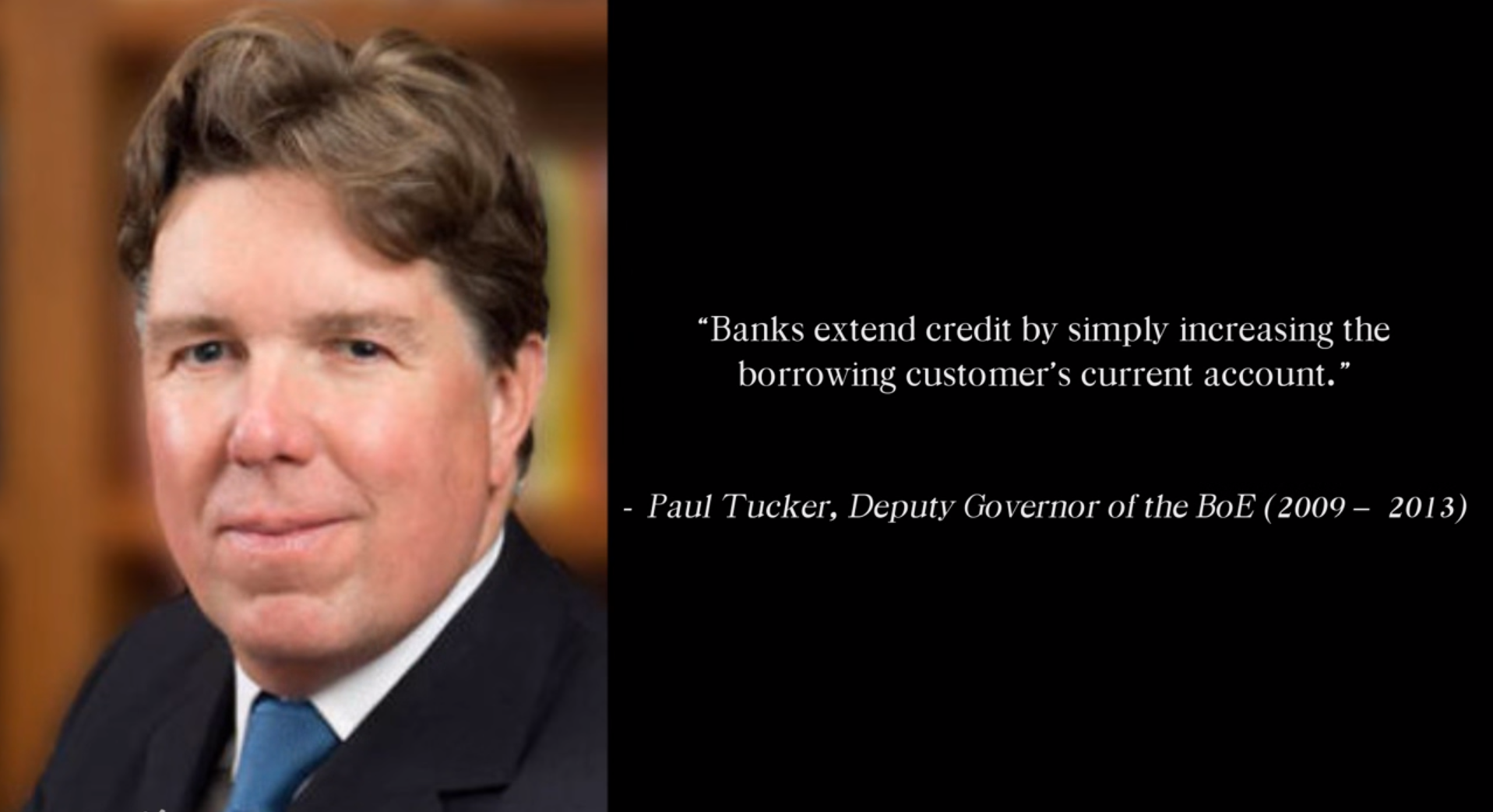 So it means when you take loan, banks do not give you other people’s money, they create money by minting and give it to you. And about 97% of the money is created like this!

Another crazy thing that the commercial banks can do is lend out 10 times the money than they actually have in reserves, which is called “fractional reserve lending”.

So this “creation” of money and bringing more money into circulation fuels what is known as “Inflation”.

Value of goods don’t increase, it’s the other way around, more money is being introduced by the central banks, and so we will be getting the same amount of goods now, by spending more money.

Thats why things are getting expensive day by day, and they will continue to become more and more expensive, until this system is eliminated.

Now introduce another concept called debt. Money that we are taking as loan is actually debt. Again, have a look at one of the quotations. One of the most underrated quotes ever made by J.P. Morgan in the year 1912 was

“Gold is money. Everything else is credit.”

So the system that we are seeing is the “debt-based monetary system” and we can infer one thing, that debt always grows, no matter what.

Another thing is that the central bank can create booms and bursts at their own will by controlling the interest rates, and by impacting the minds of people to take loans. They have been playing in the market for a long time and they have enough power to do so. If interest rates are low, more people will borrow money to buy houses, and thus, at the same time banks will be able to mint more money.

Have a look and research about the 2008 global economic crisis or subprime crises  where people borrowed too much of money than they could not actually pay for to buy not only houses, but also other commodities, and stocks. Corrupt banks had a lot to answer during the 2008 crisis, but the Federal Bank had a far bigger long term impact. One guy got arrested, just one.

So we can now come to a conclusion that it is a combination of central and commercial banks which controls our money.

The difference between these two systems is that the central bank can create money out of thin air, without anything, while commercial banks need loans to create money.

All these boils down to money, and there is light at the end of the tunnel, to get out of the debt based economic system;  which is to move value to gold, silver, and now cryptocurrencies.

I will cover another article why governments are so hesitant to make cryptocurrencies legal! It has a different perspective!
This unfair system is one of the reasons Bitcoin, a digital, decentralised, peer to peer currency, based on a trust-less system came into existence and is growing ever since, even though Satoshi Nakamoto was quite unsure whether the project will actually run successfully or not. There is still some probability that Bitcoin prices will reach a value equivalent to that of gold, but it depends on people’s adoption.

Of course I wouldnt tell that all the central banks are corrupt, but the way economic system works is still unfair.