Why We Do Not Understand Bitcoin?

Bitcoin is a difficult subject because of its many moving parts. It is polymaths in nature which means it is an amalgamation of things like Computer Science, Economics, Monetary History, Math, Politics. All ideated, tested, compressed and shipped for the 21st century and maybe beyond.

This is simply too much for any sane individual to go around. Usually, you will find an individual has really mastered one or maybe two of these fields. It is incredibly rare to find individuals who have dipped their toes in such diverse fields altogether. On top of it, people seeking an understanding have to wrap their heads around Satoshi’s anonymity (founder of BTC), to complicated mining operations of how it is produced, to 1000+ obituary messages floated by the incompetent press, to its polymath nature.

But the number one impediment to not understanding Bitcoin even after getting introduced to the idea is the lack of enough understanding of the fiat money system and its obscurity.

There are two-fold reasons for us to not understand fiat, one because we never learned to question the philosophy of money we are using i.e. fiat and second, the fiat money system is unfair and thus purposely kept obscure.

Fiat means by a formal authorization or proposition; a decree and not the Fiat car manufacturer. A system of currency formally authorized and brought in circulation is called a fiat currency system like the Dollars, the Euros, etc.

If I have to tell you in a screenshot how the system works, it will be this: 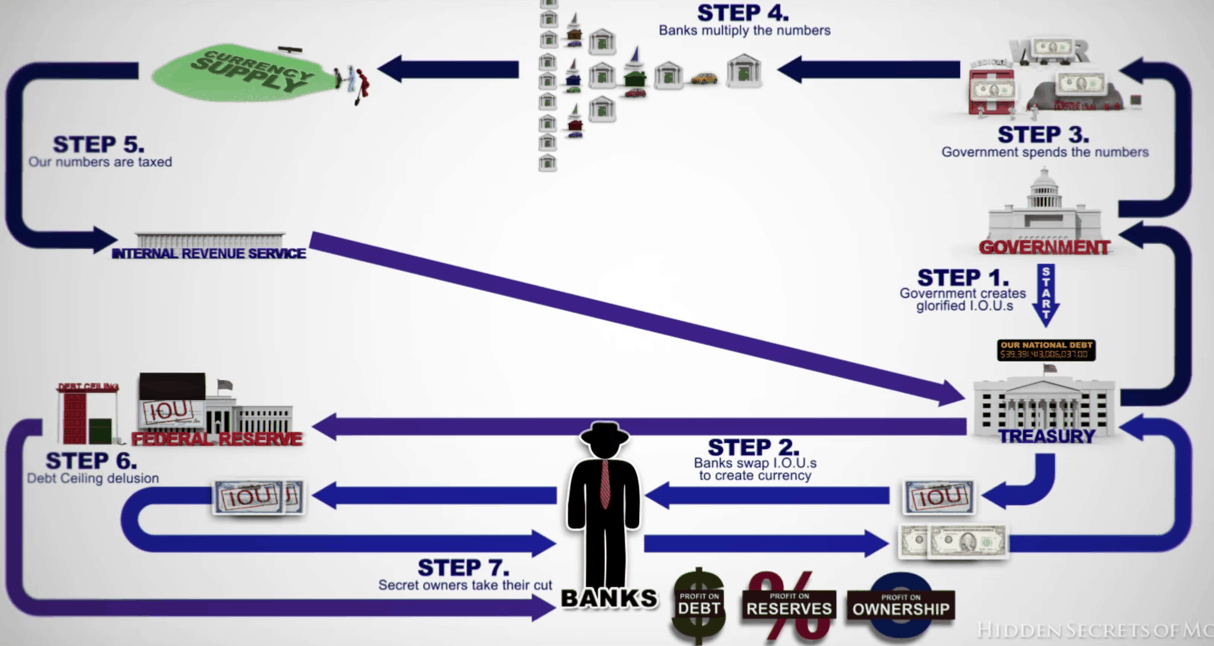 Don’t get intimidated by this image. The system is purposely designed to be complex and is like a maze. At first glance, it is not possible to comprehend it. It took me a while to figure out too.

To put it shortly, the fiat currency generated through this system is designed from day one to be debased away through inflation. This is done by putting more currency notes into circulation so as to dilute your purchasing power. Inflation this way is slowly and stealthily engineered through fiat money so as to make you feel nothing in the short run. But, in the long run, you are actually enslaved to this fiat engineered debt-based monetary system.

The system empowers and benefits those who create the currency and receive it first as they get to spend it into circulation before it has an effect on the economy. Later this only increases inflation and general masses are left guessing why they cannot afford the things they could easily in the past.

Inflation is bad because it leads to distortions and problems in an economy like the boom and busts cycle, for example, the 2008 Financial crisis. If you save your money by hoarding fiat money, inflation erodes the purchasing power of the amount saved. For instance, 100$ put underneath a mattress ten years ago can now purchase only one-third of the goods and services that it could have done in 2010.

If you don’t believe it, you should take note of these words, “The decrease in purchasing power incurred by holders of money due to inflation imparts gains to the issuers of money…” ~ Nov. 1975, p.22, published by The Federal Reserve Bank of St. Louis.

This is a huge advantage for anyone sitting there at the helm of it.

Who would want to give this up?

That’s why the whole system is kept in obscurity by purposely making it intertwined and thus it is hard to grasp. It is hardly even talked about in any of the world’s biggest of the big Universities too. The system also relies on the ignorance of general masses who don’t even care to understand this.

The economist John Maynard Keynes once wrote in his book The Economic Consequences of the Peace:

“By this means the government may secretly and unobserved confiscate the wealth of the people and not one man in a million will detect the theft.”

And who was he: 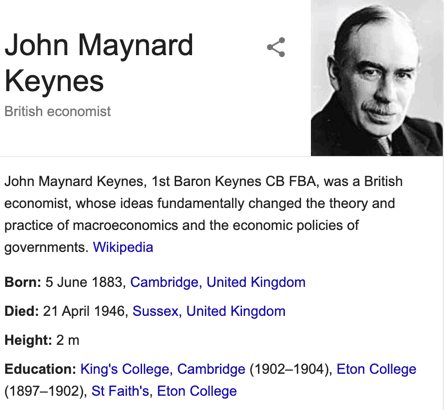 Keynes, the most celebrated economist whose theories shape today’s monetary world is bluntly saying here that by doing this they (banks & governments) are confiscating the wealth of the general masses.

This system is just backed by the hollow promises of almost all the world’s governments who are intoxicated because they are the issuers and they don’t want to give up that privilege and neither do they want you to understand it. The currencies they issue have no real value and there is no peg to any underlying commodity.

If you think your money is backed by gold reserves, you have been probably living under the rock.

Every fiat currency system is the same in the world. There are printing presses running round the clock to give you supposedly worthless pieces of paper. Fiat system is as old as it gets but in modern times, fiat came into being in 1971 in actuality.

But when in 1971, President Nixon ended the convertibility of the US dollar in proportionate gold ending the last relics of the gold standard, all the currencies of the world became fiat instantly. Thus fiat Currency was born.

Look at these two US dollar notes shown below:

If you see this above note clearly states that it is a gold certificate and 20 dollars worth of the gold coin is payable to the bearer on demand.

Whereas in the below US dollar note, it is legal tender only because the federal reserve says so and it is by the US government’s decree that this paper is worth 20 US dollar goods and services.

If you are thinking this is related to USD and the US, then frankly you are wrong. The US, I have taken only for illustration purposes but the system works pretty much the same everywhere.

History shows that every paper currency has returned to its intrinsic value of absolute ZERO and there is a 0% success rate of such paper currencies.

Actually, it is valued zero now also because intrinsically it is. Here is a snap of the US FED- Federal Reserve which accepts whatever I have said so far. They have even published the intrinsic value of their paper denominated currency notes:

If you are thinking now why this shit is even in circulation then, well it is because you and I accept it. We accept it and transfer it to follow the will of the government in the name of legal tender laws. The government decides what can be used as money and cannot be used. They have guns and the behemoth of bureaucracy to put after us, so we abide.

To put it in the words of  Sir John Stamp, former governor of the Bank of England.

The modern banking system manufactures money out of nothing. The process is perhaps the most astounding piece of sleight of hand that was ever invented. Banking was conceived in iniquity and born in sin. Bankers own the earth. Take it away from them, but leave them the power to create money, and with the flick of a pen, they will create enough money to buy it back again. Take this great power away from them, and all great fortunes like mine will disappear. And, they ought to disappear, for then this would be a better and happier world to live in. But if you want to continue to be slaves to the bankers, and pay the cost of your own slavery, then let bankers continue to create money, and control credit.

If anyone understands this then the next obvious thing he/she will seek is an alternative effectively stumbling on Bitcoin as a solution because Bitcoin is the exact opposite of fiat.

There is no printing of Bitcoin. The supply is fixed (21 million hard capped). After the 21 millionth bitcoin is mined, in around 2140, the system will produce no more. There is monetary governance without the government and the central banks. There is no seniority privilege as it is in fiat. Everyone has to work for it either by mining it or by offering goods & services for it. Hence inflation engineering isn’t possible with Bitcoin instead there will be deflation. The prices of stuff around you will yearly decrease and you will be able to buy more stuff with the same amount of money if Bitcoin is the monetary base. Who wouldn’t want that?

But such days are still far away because very few understand this enough yet. Forget about understanding, nobody even questions anything around money.

The technical and academic challenges to understand Bitcoin which I elucidated in the introduction come much later. Before that, the real impediments to us correctly contextualizing Bitcoin are philosophical and psychological.

We Don’t Question the Philosophy of Money

Though the predominant form of money used today is fiat. We don’t question the philosophy of fiat money. We never even question the status-quo of the unconscious philosophy which shapes our understanding of the subject of money.

Questioning this was neither in our philosophy of upbringing or culture.

We think governments and banks should be the gatekeepers as well as the issuers of money. This is set in stone for us since we started making sense of things and that’s why we cannot think of money as a concept independent of the government.

But Bitcoin embodies and manifests this philosophy of independent money where no one is in charge. Bitcoin is an alternative to the fiat currencies the dollars, the euros, the pounds of the world that we use but in a fairer way. Bitcoin suddenly comes and disrupts your status-quo leaving many in denial. This is contrastingly different than fiat and anyone has never seen anything like this before.

That’s why the quickest way to attain Bitcoin enlightenment is to go and question the money you have now i.e. Fiat & its creation. The understanding which will dawn upon you then will naturally motivate you to go down the Bitcoin rabbit hole and become convinced about it.

Published in Bitcoin News, Crypto Basics, How to and Reviews and Opinion

Hey there! I am Sudhir Khatwani, an IT bank professional turned into a cryptocurrency and blockchain proponent from Pune, India. Cryptocurrencies and blockchain will change human life in inconceivable ways and I am here to empower people to understand this new ecosystem so that they can use it for their benefit. You will find me reading about cryptonomics and eating if I am not doing anything else.